As a current Bible school student and avid reader, there's a lot of good stuff swimming around my brain that I want to share with you. More importantly, though, I want to encourage you and to help you see how much God loves you.

Books I Am Reading:

I played Little League baseball as a kid and I was terrible.

Right field was where I belonged because that’s what you do with a seven year old girl with no athletic ability whose stepdad happened to be the coach.

Every season I got a trophy–even though I didn’t deserve one. 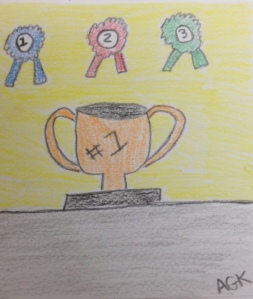 My skills didn’t improve the one year I played softball either.

Every game my coach told me the same thing when it was my turn to bat: Take one for the team.

So I would stand at the plate, let the softball hit me, and then walk to first base.

My only prayer was that the ball wouldn’t hit me in the spot that was bruised from the week before.

As terrible as I was, I still received a trophy…

And don’t get me started about my one year of girl’s basketball.

My only contribution to the team was scoring the winning shot for the other team, but I still received a trophy…

It would be foolish for me to display all of those trophies today, wouldn’t it? And yet that’s exactly what we do with our lives.

We are so proud of accomplishments that mean absolutely nothing.

I kill it at Candy Crush. I’m the top scorer in the Game Center! That has to count for something, right?

If you really want a trophy, go to a garage sale. They’re a dime a dozen.

If it’s a life of meaning you’re after, that requires a bit more effort.

Find something you love and get to work.

Quit flirting with mediocrity at the water cooler.

Yes, seasons of hard work–and even failure–will come as a result.

But I promise you that the rewards you do receive won’t end up in a garage sale.